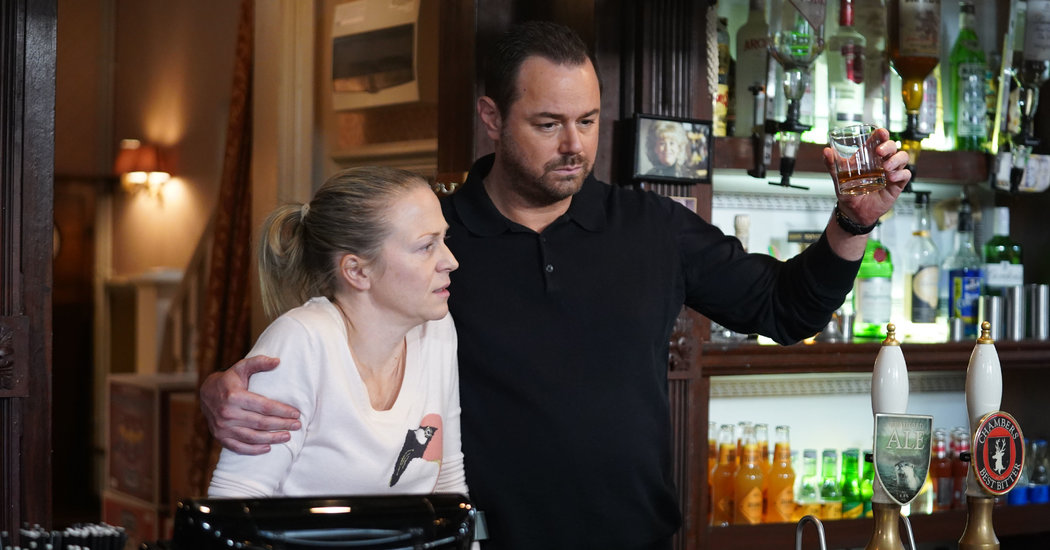 The producers of “EastEnders,” the BBC soap opera he had watched most week nights since he was a two-year-old, announced they would stop filming “until further notice,” because of the coronavirus pandemic.

Worse, the BBC was also starting to ration the episodes it had already filmed, only airing two a week, instead of four.

The following night, Simnett sat down to watch the show with his mom, then remembered it wasn’t on.

“We just had nothing to do,” he recalled, in a telephone interview. “I was like, ‘What do people who don’t watch soaps actually do in an evening?’”

Britain’s soaps, some of which have broadcast continuously for decades and whose melodramatic story lines often center on working class families, are watched by millions every night. They were the last stalwarts of the country’s cultural life to be shut down by the coronavirus: Days after Britain’s music venues, theaters and museums closed, the soaps were still in production.

In recent days, with Britons at home in virtual lockdown, viewing figures for at least one of the shows soared: 8.9 million viewers watched “EastEnders” on Monday, according to the ratings service Overnights.tv, compared with around 5.5 million the previous week, before the lockdown.

Latest Updates: Coronavirus Impact on Life in the U.S.

That week, several major soaps, including “Coronation Street,” which has been running on the ITV network since 1960, insisted they were taking steps to protect staff as they continued shooting.

But nothing could stop the inevitable. On Sunday, “Hollyoaks,” a soap aimed at younger viewers, followed “EastEnders” and announced it would stop filming. On Monday, ITV said “Coronation Street” would, too.

Three episodes of “Coronation Street” would be aired a week, rather than the usual six, so it could stay on air until July, a spokeswoman for ITV said in a telephone interview. This would mean the show would fall out of sync with real life, she said. For instance, episodes that reference Easter would air after the holiday, she added, but she hoped viewers would understand.

“It is absolutely unprecedented,” said Lisa Holdsworth, a TV scriptwriter who is the chair of the Writer’s Guild of Great Britain. In the early 2000s, during an outbreak of foot-and-mouth disease among cattle, one rural soap, “Emmerdale,” was forced to change its story lines and stop shooting outside, she said. “But they still didn’t shut down.”

This time, though, it was obviously the right thing to do, she added.

Fans on social media almost unanimously agreed with the broadcasters’ decisions to stop filming, and many expressed concern about the shows’ older stars.

“Coronavirus felt quite removed from real life until this happened,” said Ana Guerra-Moore, 25, a fan of “Coronation Street,” in a telephone interview. “After ‘EastEnders’ stopped production, I was, like, ‘God, is it going to happen to ‘Corrie’?’” she added, using a nickname for “Coronation Street.” “And a big part of me was hoping it wouldn’t, because I wanted it to still be here, to be that comfort and help everyone through.”

For now, the soaps are one of the few shows on British TV with no mention of the coronavirus: Instead, their story lines focus on the troubles of everyday life, with some dramatic plot twists thrown in. In the past week, “Hollyoaks” fans have seen characters confront each other over an affair without any hint of social distancing. On “EastEnders,” the Queen Vic pub has been filled with drinkers, even after Prime Minister Boris Johnson last week ordered pubs, cafes and restaurants to close.

Producers and fans are now asking whether the shows should reference the coronavirus when they eventually return. “I think people are wanting a bit of escapism,” said Steven Murphy, the editor of the weekly Inside Soap magazine. “so I think the soaps will just continue in their soap bubble world.”

But Phil Redmond, the TV producer who created “Hollyoaks,” said in a telephone interview that he felt soap operas should always engage in the issues of the day. “Soaps are more trusted than regular media or politicians,” he said, adding that they could bring in pandemic story lines without being boring. Online romance could blossom during self-isolation, he said, or a restaurant’s delivery driver could become a major character.

Helen Broom, an American fan who produces a “Coronation Street” podcast with her Scottish husband from their home in Michigan, said it had been nice to see characters acting normally when she watched the show via BritBox, a streaming service. But she said there had also been “a couple of cringey moments where we’ve seen people on the show shake hands or cluster together in the pub, and I’ve kind of wanted to scream at the screen, ‘Back off! Don’t touch hands!’”

Simnett, the fan from Derbyshire, said he would not mind a jokey reference to the virus, but felt months of isolation stories wouldn’t work. “People will be so sick of hearing about it constantly, they’ll want something normal that reminds them of when it wasn’t so serious,” he said.

For now, he was more concerned that episodes of “EastEnders” might run out entirely. “I don’t know how I’d go on if it did stop,” he said, with a laugh. “There are more pressing issues, but I’d be distraught in a way.”