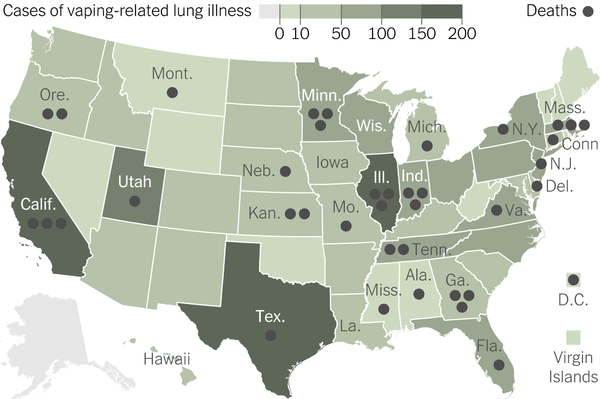 Vitamin E acetate, an ingredient sometimes added to THC-based products, has been identified as a “very strong culprit” in vaping-related lung injuries, health officials reported on Friday, a major advance in a frightening outbreak that has been growing week after week since August.

The mysterious illness has sickened 2,051 people and killed 40, putting many patients into intensive care units, with some needing ventilators or even more desperate measures to help them breathe. Most are young, male adults or even teenagers.

Hundreds of state and federal health investigators have been deployed to find out what has caused such extensive damage to patients’ lungs, which researchers have likened to the chemical burns suffered by soldiers attacked with mustard gas in World War I.

The vitamin E evidence, described on Friday by the Centers for Disease Control and Prevention, is not the last word: The agency left open the possibility that other chemicals or toxins from vaping fluids or devices could also be causing the severe respiratory ailments.

The outbreak has revealed the existence of a vast, unregulated, shadowy marketplace of vaping products that are essentially a stew of unknown chemicals concocted, packed and sold by unknown manufacturers and sellers.

The new report is based on finding vitamin E acetate in fluid samples taken from the lungs of 29 patients who had the lung disease, including two who died.

“For the first time, we have detected a potential toxin of concern, vitamin E acetate, from biological samples from patients,” with lung damage linked to vaping, Dr. Anne Schuchat, principal deputy director of the C.D.C., said at a news briefing. The samples, she said, “provided evidence of vitamin E acetate at the primary site of injury in the lungs.”

She added, “These findings tell us what entered the lungs of some patients with these injuries.”

Hundreds of people have been sickened by lung illnesses linked to vaping, most by using THC products.

The 29 patients came from 10 states scattered around the country, so the findings are considered broadly applicable and unlikely to have resulted from a single vaping product or supplier, she said.

Vitamin E acetate is sticky, like honey, and clings to lung tissue, the C.D.C. said. Researchers do not know exactly how it harms the lungs, but studies in animals are being considered to help explain that, Dr. Schuchat said.

It is commonly used as a vitamin supplement or an ingredient in skin lotions. Makers of illicit vaping fluids sometimes add it as a thickener or to dilute the THC and increase their profits. But just because something is safe to swallow or rub on the skin does not mean it is safe to inhale. The digestive system has enzymes to break down what we ingest; the lungs do not.

Samples of lung fluid from the 29 patients were also tested for plant oils, petroleum distillates like mineral oil and other potentially harmful substances. None were found, the C.D.C. said. The findings were published in Friday’s Morbidity and Mortality Weekly Report.

About 70 percent of the people with the lung ailments are male, 79 percent are younger than 35 and 86 percent say that they have vaped THC.

Many of the products used by those who became ill were illicitly obtained, public health experts have said, by patients who bought them from friends or on the street. Vaping oils typically include other additives, solvents and flavor enhancers.

Health investigators have said since nearly the beginning of the outbreak in mid-August that some ingredients, including vitamin E acetate, could be responsible for some of the lung illness cases.

State health officials in New York had first identified vitamin E acetate from several samples of vaping products collected in August that were analyzed by the Wadsworth Center Lab.

Although most cases of the vaping illness have been linked to illicit THC, Dr. Schuchat said that did not mean other vaping products could be considered safe. She said there were anecdotal reports, not yet fully investigated, of patients who said they had bought THC from licensed dispensaries in states where marijuana is legal.

Nicotine has not been exonerated, either. Some patients say they vaped only nicotine, and state health officials consider some of those reports reliable, Dr. Schuchat said.

Hoping to identify risk factors for the vaping illness, health officials in Illinois conducted a survey of 4,631 adults 18 and older who vaped and were healthy, and compared them with those who got sick from vaping. Most of the healthy responders vaped nicotine, but 21 percent used THC.

The patients who became ill were more likely to vape only THC, and to use it frequently, more than five times a day. They were nine times as likely to buy THC from informal sources like dealers, friends or on the street, and eight times as likely to have used Dank Vapes, which the officials described as “a class of largely counterfeit THC-containing products,” from unknown sources.

It is possible to become addicted to THC, and health officials say some patients may need counseling and treatment for it.

The number of lung-injury cases increased in the last week, but not as much as in previous weeks.

“The trend in cases appears to be downward, but we understand that some states are still hard hit, and this continues to be a very active investigation,” Dr. Schuchat said.

Additional fatal cases are being investigated, she added. The death count will probably go up.

Because there is still uncertainty about what is causing the illness, the C.D.C. is continuing to urge people to avoid vaping anything, including e-cigarettes.

Because of year-over-year spikes in the use of e-cigarettes among minors, the Food and Drug Administration is expected to soon announce measures that could involve banning most flavored e-cigarettes, including mint. Prohibiting menthol had been mentioned earlier, but the vaping and tobacco industries have intensively lobbied the White House and lawmakers against such a broad ban given that traditional menthol cigarettes remain on the market.

On Thursday, Juul Labs, the nation’s largest seller of e-cigarettes, took a step ahead of the anticipated flavor ban and announced that it would discontinue sales of mint-flavored pods, after the latest national surveys showed that teenagers cited fruit and mint as their favorites.

But an aide to President Trump suggested earlier this week that vape shops might somehow be exempted from restrictions. And on Friday, he noted that the industry had created a lot of jobs.

Mr. Trump said an announcement to protect young people would be made next week and would include a proposal to raise the age limit for sales of e-cigarettes to “21 or so.” Federal law now sets a minimum age of 18 to buy both cigarettes and e-cigarettes, although about one-third of states have raised the age to 21. There is bipartisan support for such a move, which would require an act of Congress.

Sheila Kaplan contributed to this article.