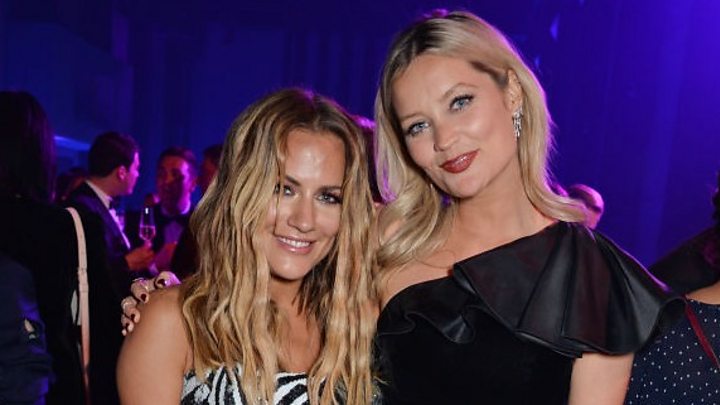 Presenter Laura Whitmore has paid tribute to her "vivacious" and "loving" friend Caroline Flack, who was found dead in her London flat on Saturday.

Fighting back tears on her BBC Radio 5 Live show, she said the former Love Island host "loved to love".

She also appealed to listeners to "be kind" to others and said she wanted to use her platform to "call people out".

"To paparazzi and tabloids looking for a cheap sell, to trolls hiding behind a keyboard - enough," she said.

A lawyer for Flack's family said on Saturday that she had taken her own life.

The 40-year-old had been "under huge pressure" since she was accused of assaulting her boyfriend Lewis Burton in December, her management company said.

If you or someone you know needs support for issues about emotional distress, these organisations may be able to help.

Whitmore, who took over presenting Love Island following Flack's arrest, said her friend "loved to laugh" and had the "most infectious chuckle".

"I'm not going to pretend she was perfect, but is anyone? She lived every mistake publicly, under the scrutiny of the media.

"Caroline loved to love. That's all she wanted. Which is why a show like Love Island was important to her, because the show is about finding love, friendship, having a laugh. The problem wasn't the show. The show... is loving and caring and safe and protected.

"The problem is, the outside world is not. Anyone who has ever compared one woman against another on Twitter, knocked someone because of their appearance, invaded someone else's privacy, who have made mean, unnecessary comments on an online forum - they need to look at themselves," she said.

Whitmore said had been debating whether she "should, would or could come on air today" but she wanted to talk about her friend "to give her the respect she deserves".

She said she had also been harassed for "just doing her job" and "words affect people".

"So to listeners - be kind. Only you are responsible for how you treat others and what you put out in the world," she said.

She then played Angels by Robbie Williams, saying her friend, who she met at V-festival about 10 years ago, loved music and loved to dance, and the song always reminded her of Flack because she "danced so beautifully to it on Strictly".

"Caroline, I'm so sad for you, for your family. I'm angry that you saw this as your only option as I know how much love and support you had. I'm sorry you didn't know that," she said just before she played the song.

"I am not sure when, but I know I'll see you on the dance floor again and I hope you are at peace and know that you are loved."

Flack had co-hosted The X Factor and won Strictly Come Dancing in 2014, as well as presenting ITV's Love Island.

She stood down from the dating show after she was charged with assault in December. She denied the charges.

Following her death, an ITV spokeswoman said she was a "much-loved member of the Love Island team".

In an emotional Instagram post, her boyfriend Lewis Burton said his "heart is broken" and promised the star he would "be her voice" and "try to make her proud everyday".

Bail conditions had stopped Flack having any contact with Burton ahead of her trial.

Her management company have criticised the Crown Prosecution Service for refusing to drop charges, even though Burton said he didn't want the case to go ahead.

The CPS said it would not comment on the specifics of the case "given the tragic circumstances".

Former chief prosecutor Nazir Afzal said his impression was that the case had been determined to be a serious case, and one which the CPS felt they should proceed with "regardless of what the victim thought".

Honey Lancaster-James, a TV psychologist who worked with celebrity contestants on an early series of Love Island, said it was important not to "point the finger of blame".

"There are often a number of factors, and a number of things that have led to a deterioration in mental health," she said.

Other celebrities and ex-Love Island stars have also paid tribute to Flack, describing her death as "heartbreaking".

Her co-presenter on The X Factor and The Xtra Factor, Olly Murs, said he "always knew how fragile" she was and his heart was "forever broken" because she was "like a sister" and they were "friends for life".

"This will hurt forever, love you cazza, Your Ols," he said.