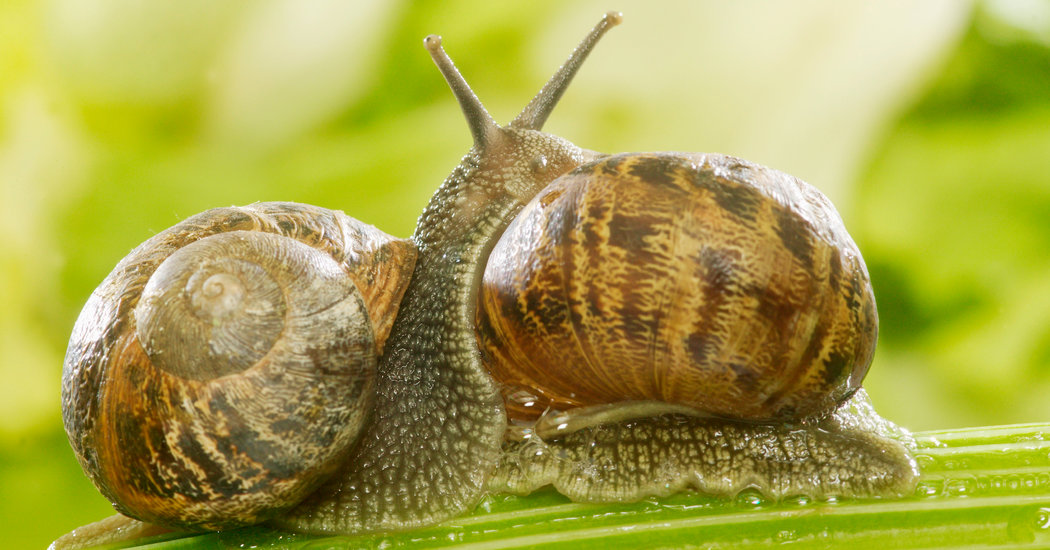 Come Valentine’s Day, some people may wonder to themselves, “Is this the only way to find a mate?” And the answer is no. There are many ways to find one.

But be careful what you wish for. Evolution has produced all manner of surprising interactions that enable reproduction in nature. Compared to these four unusual tales from the animal kingdom, being someone’s Valentine might sound pretty good.

The way that male painted turtles entice females may sound almost romantic. The male faces the female, stretches out his long, dainty claws and strums the sides of her neck, head and face; this courtship gesture has been well-documented since the days of Charles Darwin. But scientists recently documented another mating strategy, often deployed by the largest males, that is far less elegant.

At Canada’s Algonquin Wildlife Research Station, researchers noticed injury marks on the heads and necks of female painted turtles. Year after year, and often during breeding season, the wounds appeared fresh. The marks matched the shape of the spiky front of a male turtle’s shell and of sharp, toothlike structures on his beak.

Mr. Moldowan and his colleagues hypothesize that the males ram and grind the front portion of their shells on the soft head and neck tissues of the females to coerce them to submit.

The larger, possibly older males are more aggressive, and their “sexual weapons” are more developed, the researchers noted. The smaller males still rely on seducing the females with their claws, which appear more grandiose compared to the males’ bodies. That may prompt larger males to adopt more combative tactics.

Mr. Moldowan compared the situation to a small moose sporting a gigantic rack of antlers. On a larger male, the same antlers don’t look as impressive.

But which male — large or small — wins the race to father more painted turtle generations remains a mystery. Mr. Moldowan’s team is now conducting paternity tests to see if the large, mature and weaponized brutes sire more offspring each season than the younger males.

In the octopus world, the act of reproduction is fraught with risk. That seems to be especially true when smaller males mate larger, hungry females.

In 2010, Christine Huffard, a marine biologist at the Monterey Bay Aquarium Research Institute, observed a mating pair of day octopuses in Eastern Indonesia. The male was 1.6 inches shorter than the female and had 58 percent less body mass. He crawled across a coral reef, parking himself at arm’s length from a female. He caught her attention by waving his long, modified tentacle — a mating arm — then inserted it into a duct in her body that leads to the ovary.

The more time the tip of his arm spent inside her body, the more sperm packets he could deliver to her eggs. And it’s during this intimate period that small males are most vulnerable to cannibalistic females.

After 15 minutes, as the mating ritual neared its end, the female sneaked closer to the male, rapidly extending her two front arm. The typically brown-colored male quickly turned white, attempting to flee. She strangled him, then hauled his dead body to her den, where, Dr. Huffard presumes, she ate him.

Other researchers studying the same octopus species in Micronesia witnessed a small male being devoured by a female in her den. Sexual cannibalism may operate in other octopus species, too.

It’s unknown how often small males fall prey to females, but the presence of an exceptionally long mating arm and the distant mating position may hint at “sexual cannibalism being a factor in their evolution,” Dr. Huffard said.

Male bed bugs sure give love a bad name. Each possesses a penis that juts out from the tip of the abdomens. Curved and ending in a sharp needlelike point, the instrument seems destined to inflict damage. The male latches on to the female’s back, pierces a hole into a groove on her abdomen and directs his ejaculate straight into her bloodstream. The sperm is ultimately ferried to the ovaries, for fertilization.

Males deploy this “traumatic insemination” to initiate frequent re-mating with females, ultimately stabbing the same individual multiple times. The sperm deposited by the most recent male gains precedence, and is likely to sire more offspring, so there’s a selective advantage to being last.

As a likely result of this method of mating, female bed bugs seem to live shorter lives, perhaps because they direct their energy toward either mending these wounds or beefing up their immune system to fight infections.

In hermaphroditic land snails, sex is complicated. These promiscuous snails, capable of being a father and mother at the same time, engage in a violent race to sire as many offspring as they can.

Mating rituals start with hours of what scientists call “foreplay.” Snail pairs get close and sniff each other. But they are also positioning themselves to launch from their necks a hard, sharp calcium carbonate spear that pierces the mate’s body. The mucus on the dart contains chemicals that manipulate the stabbed snail’s female reproductive organ. In some species, the mucus discourages darted snails from mating again. Its chemical contents also encourage sperm storage for fertilizing the eggs later.

Both partners deposit sperm into each other’s body after dueling with darts, but snails with a larger dart — and that harpoon frequently — gain a paternity boost, said Kazuki Kimura, a biologist at the Kyungpook National University in South Korea.

Among Japanese land snails, Bradybaena pellucida, individuals that take on the maternal role in reproduction bear an added cost — they live only three-fourths of a typical 60-day life, and lay fewer eggs. For the snails, it’s worth fighting to be the father, Dr. Kimura said.