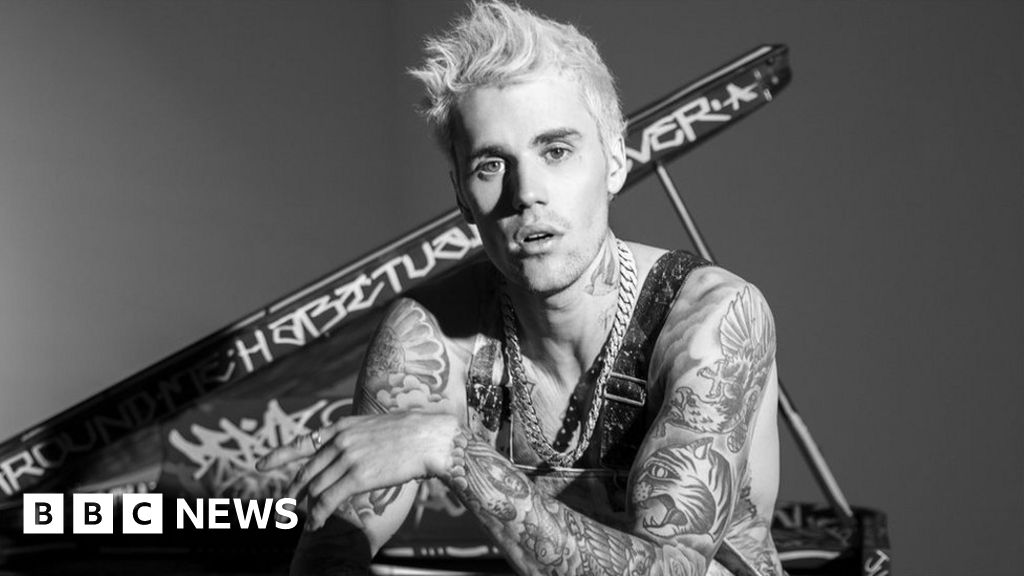 "Every time I get up here, I don't know what I'm going to say next," announces Justin Bieber to a room full of journalists, who've gathered in London to hear his latest album, Changes. "That's the fun."

Here's one of the planet's biggest pop stars, playing new music off a laptop and delivering a rambling, unscripted monologue before every song. Well, almost every song...

"Maybe we should skip this one?" he says as his DJ cues up Intentions, a bouncy duet with Quavo that came out last week.

"Everybody's heard it already. They can go home and freakin' Google it."

It's not that Bieber dislikes the song. In fact, he seems pretty pleased with his fifth album as a whole. It's just that the set-up is uncomfortably awkward for everyone involved.

Bieber is situated in a DJ booth in the centre of a tiny club in central London. Fans, influencers, reviewers and record label staff surround him on every side; and he hasn't quite figured out what to do with himself while the songs play.

Should he close his eyes and sing along? Should he dance? Should he study critics' faces to gauge their reactions? Should he lock eyes with people and serenade them? Should he impersonate Borat?

The answer is, apparently, "Yes, all of the above".

It doesn't get any less weird between the songs.

Bieber, who's in a playful mood, discusses the fertility problems of a senior executive at Island Records, encourages the audience to "step into faith", offers a prayer for anyone who's single, and tries to FaceTime his wife.

"She's in bed and she's not answering," he sighs. "And she'd probably be pretty annoyed to be put on the spot like that… But I miss her."

Anyone who's watched Bieber's recent documentary series, Seasons, will know that Baldwin is the heart and soul of his new album.

The couple got married in September 2018 after a 12-week relationship - built on more than 10 years of friendship - and Bieber credits Baldwin with helping him find balance, after a "dark period" during which he spiralled into anxiety and depression.

"I think she's the only one that can put up with me, for real," says the 25-year-old in Seasons. "This girl forgives me left and right. I'm a damn nightmare."

His friend Ryan Good goes on to call Baldwin "an inspirational force in [Bieber's] life".

"It gives more depth to his performances when she's in the studio," he says. "Why do they work so well? I think she's got a lot of patience."

On Changes, Bieber spends 17 tracks expressing his unconditional love, even when it makes him sound exhausting to live with.

"I get frustrated when you're busy," he sings on Available. "Feeling less than a priority."

On ETA he's staring "out the window," waiting for Baldwin's car to drive up the street. On Come Around Me, he pleads with her to greet him "like you missed me - even though you've been with me."

"The thought of being with my wife forever gives me chills," he tells the audience in London. "This album is obviously dedicated to her and my love towards her."

Admittedly, there's something sweet about the puppy-dog sincerity of his lyrics. When he sings, on Confessions, that Baldwin can take his low self-esteem and "lift it right through the ceiling," it's genuinely emotional.

He's there for her, too, on a song called Take It Out On Me.

"There are times we all get frustrated and upset," he says as he introduces the song. "I'm letting my wife know that whatever happens, she can take it out on me... in the sack."

OK, so he's not the best salesman for his own work, but Bieber has the Midas touch when it comes to music. His last album, Purpose, sold more than five million copies, and steered pop in a new direction with its uncluttered arrangements and dancehall rhythms.

Although he went on hiatus in 2017, cancelling his world tour for his "soul and wellbeing", his remixes of Luis Fonsi's Despacito and Billie Eilish's Bad Guy gave both those megahits a fresh sales boost; and he scored the third biggest-selling single of 2019 with the Ed Sheeran duet I Don't Care.

Unsurprisingly, then, Changes doesn't stray too far from the formula he established on Purpose: There are drunken, underwater synths and disembodied vocal samples; spliced with drowsy hip-hop beats and Bieber's fluttering vocals.

But much of the new music lacks the dynamic progression that great pop songs need. Everything is built around a mood or a feeling - and there's a worrying absence of memorable hooks.

It all seems to have been written to appeal to Spotify's playlist algorithms, or the 15-second loops of Tik Tok. Sometimes, Bieber sounds barely interested in what he's singing (which is odd, because the docu-series made it clear how much time he invested in the recording process).

Things improve on the second half of the album, where club beats are replaced by acoustic guitars; and his vocals finally get the chance to soar.

The title track and a Tracy Chapman-inspired ballad called At Least For Now both address Bieber's mental health. His honesty in those moments is stark and affecting; and you start to realise it's a miracle that the album exists at all.

In the documentary, Bieber explains how, four years ago, his drug problem became so bad "I felt like I was dying".

"My security were coming into the room at night to check my pulse," he said. "It was legit, crazy scary."

Getting sober and working on the album gave the star a new focus: helping fans who were struggling like him.

"I want to say that you're not alone," he explained in the series' fifth episode. "Life is worth living and if you're not going to give up, the only thing to do is push forward."

The new album might not connect in the way he hopes (and admittedly the peculiar circumstances of the playback may have affected its potency) but simply seeing Bieber comfortable in his own skin, doting on his wife, goofing around with the press and revelling in the music he'd just made, was inspiring in itself.