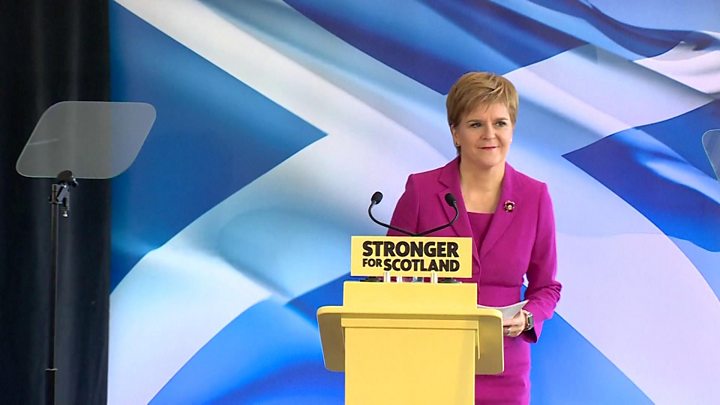 Nicola Sturgeon has set out a list of demands she would make in return for backing a minority Labour government to keep Boris Johnson out of Number 10.

Ms Sturgeon made clear that Labour would need to back the "principle" of a second independence referendum.

The first minister said she would also seek greater powers for the Scottish Parliament, and an end to austerity.

But the SNP leader insisted she would not form a formal coalition with Labour if there is a hung parliament.

Instead, she said her party would potentially be willing to back a minority Labour government led by Jeremy Corbyn on an issue-by-issue basis.

The SNP won 35 seats in the last general election in 2017, making it the third largest party in the House of Commons.

But Ms Sturgeon again warned that other parties "need not bother picking up the phone" to her after the election unless they are willing to support her party's right to hold an independence referendum next year.

She said her party would drive a "hard bargain" with anyone seeking SNP support in the event of a hung parliament - and explicitly ruled out doing any deal with the Conservatives.

Ms Sturgeon's list of demands for SNP support included the "principle of the people of Scotland deciding our own future", as well as the devolution of powers over immigration, employment and drug laws.

Prime Minister Boris Johnson said during a visit to Scotland on Thursday that he would fight to "keep our fantastic United Kingdom together and prevent another referendum next year".

The Liberal Democrats are also firmly opposed to another independence referendum - while Labour leader Jeremy Corbyn has said indyref2 is neither "desirable or necessary" and has indicated he would not support one in the "formative years" of a Labour government.

Speaking to the BBC's Laura Kuenssberg after the launch of her party's election campaign, Ms Sturgeon said that the SNP holding the balance of power after the election would put Scotland in an "incredibly influential position".

She stressed that she would "never put Boris Johnson in power" and claimed that people had "good reason" to be concerned about the prospect of Mr Corbyn becoming prime minister.

But she insisted it would be better to have SNP MPs "in there making sure the right issues are progressed and the right values upheld".

The SNP leader had earlier said the vote on 12 December would be the "most important in our lifetime", and said the outcome would determine the future of the country for "generations to come".

Ms Sturgeon said Scotland had been on a "journey" in the two decades since the creation of the devolved Scottish Parliament.

But she claimed that "many of the gains of the last 20 years and the promise of a better future" were now under threat from what she described as "hardline Brexit ultras" within the Conservative Party.

Ms Sturgeon said: "Scotland's vote to remain in the EU has been ignored.

"The Conservative Party has ridden roughshod over the Scottish Parliament. For the first time ever the UK government has chosen to legislate on devolved matters without the consent of Holyrood.

"With so-called 'moderate' Conservatives in full retreat and the hard-line Brexit ultras on the march, that is surely only a taste of what is to come."

Ms Sturgeon said a vote for the SNP was therefore a vote to "escape Brexit" and to "take Scotland's future out of the hands of Boris Johnson and a broken Westminster system".

And she said the SNP already had "a cast iron mandate" for another independence referendum and warned the prime minister that he has "no right to block the democratic wishes of the people of Scotland".

Ms Sturgeon also unveiled plans for the SNP to launch a bill at Westminster aimed at protecting the NHS across the UK from privatisation and future trade deals.

The NHS Protection Bill would block any UK government from using the NHS as a "bargaining chip" in trade talks.

If passed it would also give devolved parliaments in Scotland, Wales and Northern Ireland a veto on any deal, she said.

Ms Sturgeon claims that despite health policy being devolved to the Scottish Parliament, the UK government could still "sell off" the NHS in trade negotiations.

The UK government has insisted the NHS is "not on the table" for trade talks and is not in any way "up for sale", pledging to bring forward the "biggest programme of NHS investment in a generation" if the Conservatives win the election.

But Labour has claimed a Conservative trade deal with the US after Brexit could cost the NHS £500m a week by driving up the price of medicines.

In a visit to Scotland on Thursday, Mr Johnson also hit out at Ms Sturgeon's goal of holding a new independence vote in 2020, saying the Tories would "prevent another referendum".

He added: "We are the party that is saying come on, let's get together as a whole UK, let's get Brexit done, get this thing over the line and then get on with bringing our great country together and unleashing the potential of the whole UK."

Meanwhile Lib Dem leader Jo Swinson is also taking her campaign in Scotland on Friday with a visit to Fife.

She has promoted her party as "the home of Remain" and backers of the UK, saying: "The four nations of the United Kingdom are stronger when they work together, so we should work together to stop Brexit."

Do you have any other questions about elections in the UK?