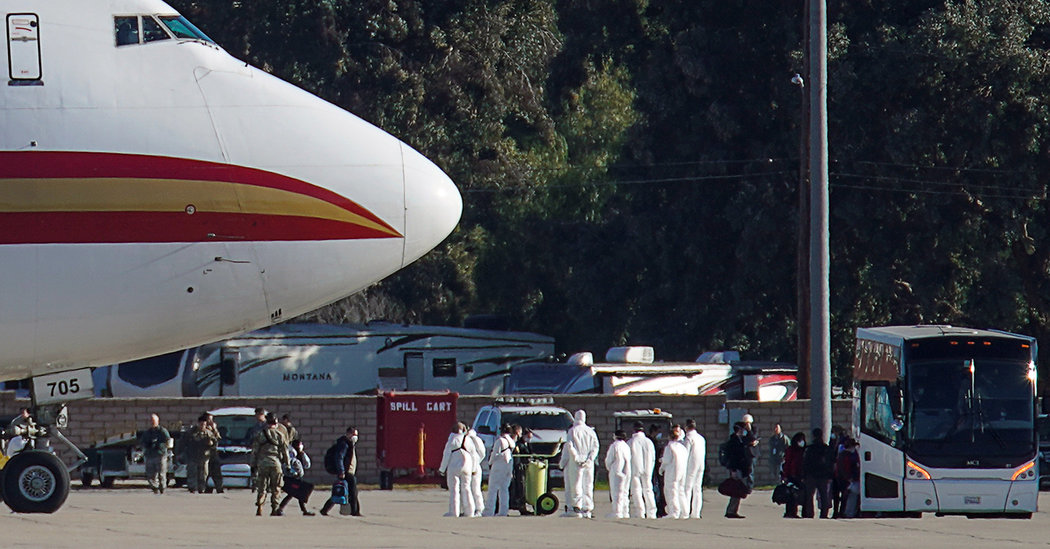 The United States government has imposed a two-week federal quarantine on 195 people who were evacuated on Wednesday from Wuhan, China, to a California military base, the Centers for Disease Control and Prevention said on Friday.

The action means that the group will be held at March Air Reserve Base in Riverside, Calif., to ensure they are not infected with the Wuhan coronavirus, which has sickened more than 9,800 people in China and killed more than 200. The 14-day period is dated from when their plane left Wuhan.

“While we recognize this is an unprecedented action, we are facing an unprecedented health threat,” Dr. Nancy Messonnier, director of the National Center for Immunization and Respiratory Diseases, said at a news conference on Friday.

A federal quarantine order in the United States is rare; the last one was imposed was in the 1960s, but it was limited.

Dr. Messonnier called the federal order on Friday “science-based,” saying it was warranted because of the worsening epidemic in China. She cited the widening, rapid spread of the disease there, the increase in person-to-person transmission and the rising death toll. In addition, evidence has been emerging that people can transmit the disease even before they show symptoms of the illness, which can cause pneumonia in severe cases.

Another concern was that the passengers evacuated had been in Wuhan, the epicenter of the outbreak. At a news conference later on Friday, Alex M. Azar II, the secretary of health and human services, announced that other citizens of the United States who were returning from Hubei Province, which includes Wuhan, would also be quarantined for two weeks. Mr. Azar also declared a public health emergency for the United States, and said foreign nationals who had been to China during the last 14 days would not be allowed into the United States.

“This is a very serious public health situation, and the C.D.C. and federal government have and will continue to take aggressive action to protect the public,” Dr. Messonnier said. “If we take strong measures now, we may be able to blunt” the impact of the virus in the United States.

Dr. Messonnier said that the people who were quarantined did not pose a threat to the surrounding community.

Since the 195 evacuees arrived in Riverside, members of the group have had their noses and throats swabbed to test for the virus, and their temperatures taken several times a day. They were initially told that they would be detained for at least 72 hours, and possibly 14 days. Two weeks is thought to be the upper limit of the incubation period; if symptoms don’t start by then, a person can be cleared as not infected.

Not all the virus tests have been completed, but even if the results are negative, that does not mean a person is not infected, Dr. Messonnier said. It is possible to test too early for the virus, so a person who tests negative could still become ill and infect others. Therefore, officials said it was safer to detain people for the entire incubation period.

Dr. Martin Cetron, director of the C.D.C.’s global migration and quarantine division, said the evacuees would benefit from the quarantine, which would prevent them from infecting their families and would provide close monitoring so that they could receive medical treatment quickly if symptoms developed.

Citing quarantines in Toronto during the SARS outbreak there in 2003, he said that most people being quarantined accept it as “part of their civic responsibility to protect their community,” once they understand the reasons. He also said that many people flown home from Wuhan were diplomats who understood this as part of their duty.

Until Friday, the evacuees’ detention at the air base had been unofficial. The group had stayed voluntarily for testing, except for one member, who tried to leave on Wednesday and was quarantined by Riverside County.

Federal law authorizes the C.D.C. to impose quarantines, but the power is rarely used. The last large-scale quarantine was imposed during the Spanish flu pandemic of 1918-19. The limited one in the 1960s that Dr. Cetron mentioned involved a possible case of smallpox.

Last week, China took the extreme measure of halting public transit and imposing a quarantine on Wuhan, a city of 11 million people. But people were already traveling extensively in and out of the country for celebrations of the Lunar New Year, prompting concerns that the virus would spread widely around the globe.

So far, six people in the United States are known to be infected. Five had been to Wuhan and the sixth is the husband of one of those patients. He had not traveled to Wuhan, but contracted the illness from his wife after she returned home to Chicago. The other cases have been in Washington State, California and Arizona.

More than 100 people in the United States are being monitored as “patients under investigation,” because they have symptoms like fever and cough and have been to Wuhan or in contact with patients.

Hundreds of other contacts of patients have been told to reach out to health officials immediately if they become ill.

At the briefing, Dr. Messonnier cited a new report from Germany as part of the evidence that pushed the C.D.C. to impose the quarantine.

Physicians there who identified the first coronavirus case in their country have reported that the patient was infected by a colleague visiting from China who was not yet sick.

That the disease may be transmitted before infected people show symptoms will make the disease harder to contain, experts said.

A letter published in the New England Journal of Medicine said the German patient was a healthy 33-year-old businessman who developed a sore throat, chills and muscle aches on Jan. 24, with a fever spiking to 102.4 the next day, along with a cough. He felt better a day later and returned to work on Jan. 27.

Before he became ill, he had met with a Chinese business partner from his company near Munich, on Jan. 20 and 21. She was a resident of Shanghai who had been in Germany from Jan. 19 to 22. Though she was healthy during the visit, she got sick during her flight back to China, where she tested positive for the new coronavirus on Jan. 26. She informed her company, which traced her contacts to alert anyone she might have exposed.

The businessman was contacted, and although he was already recovering, he tested positive for the virus.

On Jan. 28, three more employees of the company in Germany tested positive for the coronavirus, only one of whom had contact with the woman from Shanghai. The others were apparently infected by their male colleague, before he developed symptoms. All of them were admitted to the hospital, where they were isolated and monitored, and none have developed severe symptoms.

The authors of the letter in the New England Journal of Medicine, who are from Munich and Berlin, said it was “notable that the infection appears to have been transmitted during the incubation period” of the woman from Shanghai, who shortly afterward had only a brief, mild illness.

“It does mean that transmission is more readily achieved than it was in SARS,” an earlier coronavirus disease, said Dr. William Schaffner, an infectious disease specialist at Vanderbilt University Medical Center. “The report from Germany indicates quite conclusively that spread during the incubation period when the person is not sick themselves can take place.”

But, he added, “We don’t know how frequently it happens.”

“This is a kind of natural experiment, where people were nicely shown to be in a chain of transmission, and it sounds very, very plausible,” Dr. Schaffner said.

A scientific paper about the first patient in the United States to test positive for the coronavirus revealed more details about the course the illness takes.

The patient, a 35-year-old from Snohomish County, Wash., returned to the United States on Jan. 15 from a visit to Wuhan, and developed a cough and fever as soon as he got home.

After reading about the latest coronavirus in news reports, he sought medical treatment and informed his health care providers about his travel, although he had not been to an animal market or had contact with sick people.

He was tested and sent home, but was called back in on Jan. 20 when the test came back positive. He was hospitalized in an isolation unit on Jan. 21, and was still in the hospital on Thursday.

The Washington resident did not become severely ill until nine days after his symptoms started. An X-ray then revealed pneumonia, and he received an experimental antiviral drug called remdesivir on a compassionate basis, for which the Food and Drug Administration allows use of a drug not yet approved.

By the 12th day of his illness, he no longer had symptoms, according to a description of his case published on Friday in the New England Journal of Medicine.